You can download the 16 coloured number cards to make the FOZ Magic Square. There is also a graphic design for the reverse of the card. (it´s better to print the cards in thick paper)
small size
large size

Instructions, step by step, how to do a Mathemagical Presentation of Magic Squares and FOZUDOKUS. (Excel file: in Spanish)

Latest information about the FOZUDOKU
https://fozudoku.wordpress.com
In this website you can learn the FIVE STEPS that will allow you to construct your own FOZUDOKUS with the cards face down, ready to be solved.

What is The FOZ Magic Square?

The FOZ Magic Square is a 4x4 magic square with four added colours (red, yellow, blue and green) in such a way that each group of four numbers that add up the same (34) have these four colours without one colour repeated twice. 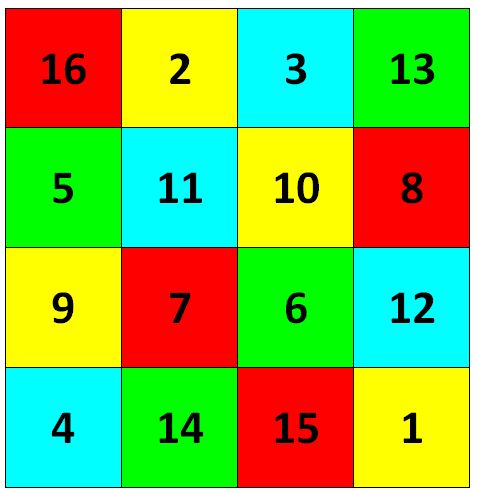 The only requisite needed to form a magic square is that the numbers in its horizontal lines, vertical lines and diagonal lines add up the same.

The FOZ Magic Square, has also other groups of four numbers that add up the same (34):
The four corners, the small 2x2 square in the centre, each of the four small 2x2 squares that form a quarter of the 4x4 square and the four corners of each of the four 3x3 squares that are inside the 4x4 square.
All this groups of four numbers have no colours repeated twice.

The following are various groups of four numbers that add up the same (34) and has no colours repeated twice in The FOZ Magic Square. 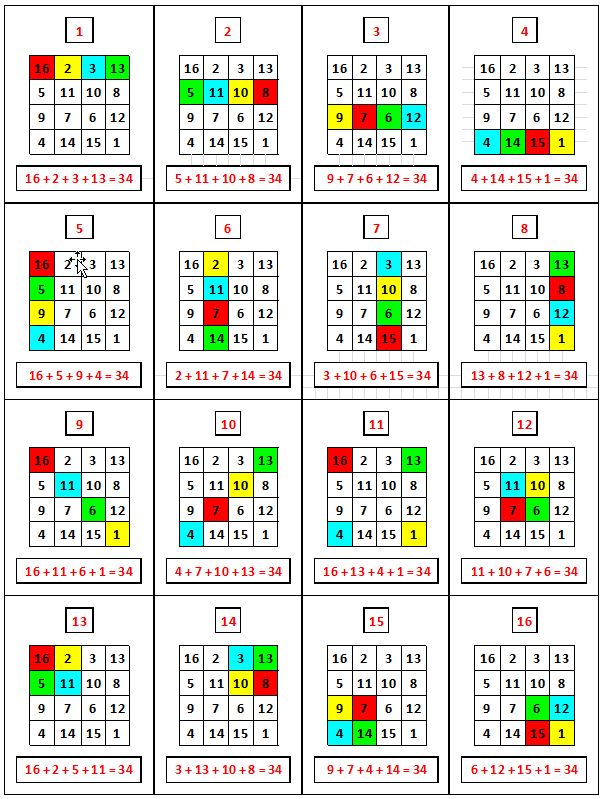 Why the name FOZ for this Magic Square?

FOZ is a lovely village in the cost of Lugo (Galicia, Spain)
This is the place, my wife home village, where we spend the summer, now that she and I are both retired, enjoying the benign climate, beautiful beaches, and lovely routes that surround the cost, as well as enjoying the excellent Galician traditional cuisine.

It was here in FOZ, where this magic square was born, when I was playing with 16 coloured magnets in the fridge door in my kitchen, I realise that a 4x4 square could be formed with four colours in such a way that not a colour was repeated in any of its horizontal lines, vertical lines and diagonal lines
I then remembered the magic squares that my father taught me as a child…

I put the same four colours in the sixteen numbers of the 4x4 magic square and I was amazed to see that NOT a colour was repeated in any of the groups of four numbers that add up the same (34).
I realised what this innovation meant, as it could be used on the traditional Spanish deck of 48 cards. Furthermore I saw the educational potential, that this magic square could be used not only as entertainment. Since then because it was born in FOZ I named it with the name it is known today El Cuadrado Mágico de FOZ, (The FOZ Magic Square).

For more information about FOZ I recommend these links :

What use has the FOZ Magic Square?

What is remarkable about The FOZ Magic Square is that none of its four colours is repeated twice in any of the groups of four numbers that add up the same (34). This added innovation, unique among magic squares is ideal to be used in the traditional Spanish deck of 48 cards, to form three FOZ Magic squares with all its cards, as their four suits have the same four colours (copas/cups = red, oros/gold = yellow, espadas/swords = blue and bastos/clubs = green).

Both can be used as entertainment and as an educational tool at the same time, of great benefit for children and adults alike.
You will find plenty information on these pages.

If there is something you do not understand or if you have an idea or suggestion to improve this web page, please get in touch with me: